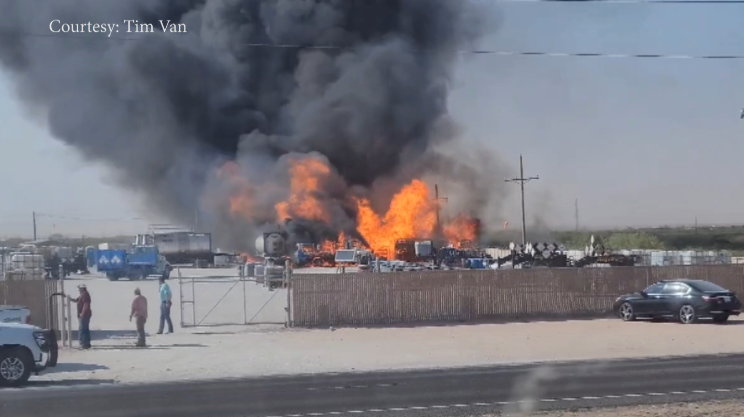 YourBasin.Com is working to confirm the name of the business, along N. I-20 Service Rd. through Mile 148, at the Midland and Martin counties border.

At approximately 5:30 p.m. Wednesday, the Midland County Fire Department and Martin County Mutual Aid responded to a fire call at a business.

“They were mixing or dumping chemicals and somehow they ignited,” said Midland County Fire Marshal Justin Bunch. “We implicated two flammable liquids: toluene and methanol… Why were they trying to mix them, I don’t know. We are still trying to investigate this.

Fortunately, Bunch said no structures were damaged. Only the 55-barrel drums containing the chemicals were destroyed. They got hot and exploded, Bunch said.

One vehicle was considered a total loss. One person was taken to hospital with flash burns. The fire marshal said the injuries were caused by rapid, instantaneous heat. The individual is expected to be well.

Fire crews will monitor the fire for hot spots. The flames were not completely under control Wednesday evening around 7:30 p.m.

“They are still working on it. The problem we currently have is an alcohol-based product. The foam that we use for structural fires or petroleum fires like tank batteries does not work as well with this type of fire. They extinguish the fire, then it relights.

Firefighters were waiting for specialist foam, which should have arrived by now. Bunch said small grass fires were started due to the chemical fire, but were quickly extinguished. There is no threat to the public.