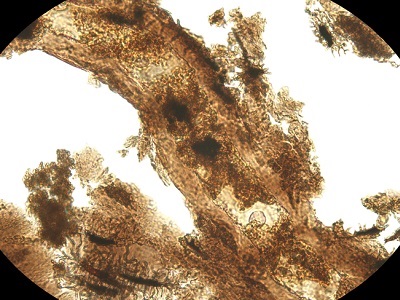 Microscopic view of soft tissue extracted from the bones of one of the dinosaur (Allosaurus) specimens that were studied for metabolic signals (metabolic cross-links) in protein bone matrix fossilization products. Fossilization introduces additional reticulations which, in combination with metabolic reticulations, generate the characteristic brown color of the fossil extracellular matrix that holds in place bone cells (dark, branching structures) and blood vessels (tube-like structure in the center ). Credit: J. Wiemann

For decades, paleontologists have debated whether dinosaurs were warm-blooded, like modern mammals and birds, or cold-blooded, like modern reptiles. Knowing whether dinosaurs were warm or cold-blooded could give us clues about how active they were and how they lived daily, but the methods for determining whether they were hot or cold-blooded – how quickly their metabolism could turn oxygen into energy – were inconclusive. But in a new article by Naturescientists unveil a new method to study the metabolic rates of dinosaurs, using clues in their bones that indicate how much the animals breathed in their last hour of life.

“It’s really exciting for us as paleontologists – whether dinosaurs were warm or cold blooded is one of the oldest questions in paleontology, and now we think we have a consensus that most dinosaurs were warm-blooded,” says Jasmina Wiemann, lead author of the paper and a postdoctoral fellow at the California Institute of Technology.

“The new proxy developed by Jasmina Wiemann allows us to directly deduce the metabolism of extinct organisms, something we dreamed of only a few years ago. We also found different metabolic rates characterizing different groups, which was previously suggested based on other methods, but never directly tested,” says Matteo Fabbri, postdoctoral researcher at the Field Museum in Chicago and one of the authors of the study.

People sometimes talk about metabolism in terms of how easy it is for someone to stay in shape, but basically, “metabolism is how efficiently we convert the oxygen we breathe into chemical energy that fuels our bodies”, says Wiemann, who is affiliated with Yale University and the Los Angeles County Museum of Natural History.

With birds being warm-blooded and reptiles being cold-blooded, dinosaurs were caught in the middle of a debate. Birds are the only dinosaurs that survived the mass extinction at the end of the Cretaceous, but dinosaurs (and by extension, birds) are technically reptiles – aside from birds, their closest living relatives are crocodiles and the alligators. Would this make the dinosaurs warm-blooded or cold-blooded?

Scientists have attempted to glean the metabolic rates of dinosaurs from chemical and osteohistological analyzes of their bones. “In the past, people have examined dinosaur bones with isotopic geochemistry that essentially functions as a paleo-thermometer,” Wiemann says. “It’s a really cool approach and it was really groundbreaking when it came out, and it continues to provide some very interesting insights into the physiology of extinct animals. But we realized that we don’t really understand yet how the processes of fossilization alter the isotopic signals we pick up, so it is difficult to unambiguously compare fossil data to modern animals.

Another method to study metabolism is growth rate. “If you look at a cross-section of dinosaur bone tissue, you can see a series of lines, like tree rings, that correspond to years of growth,” Fabbri says. “You can count the growth lines and the space between them to see how fast the dinosaur grew. The limit depends on how you turn the growth rate estimates into metabolism: faster or slower growth can have more to do with the animal’s life stage than its metabolism, such as how we grow faster when we’re young and slower when we’re older.”

The new method proposed by Wiemann, Fabbri and their colleagues does not take into account the minerals present in the bones or the rate of growth of the dinosaur. Instead, they’re looking at one of the most fundamental features of metabolism: oxygen utilization. When animals breathe, secondary products are formed which react with proteins, sugars and lipids, leaving behind molecular “waste”. This waste is extremely stable and insoluble in water, so it is preserved during the fossilization process. It leaves behind a record of how much oxygen a dinosaur breathed and, therefore, its metabolic rate.

The researchers looked for these pieces of molecular waste in dark-colored fossil femurs, because these dark colors indicate that a lot of organic material is preserved. They examined the fossils using Raman and Fourier transform infrared spectroscopy – “these methods work like laser microscopes, we can essentially quantify the abundance of these molecular markers that tell us about metabolic rate”, explains Wiemann. “It’s a particularly attractive method for paleontologists because it’s non-destructive.”

The team analyzed the femurs of 55 different groups of animals, including dinosaurs, their flying cousins ​​the pterosaurs, their more distant marine relatives the plesiosaurs, and modern birds, mammals and lizards. They compared the amount of molecular byproducts related to respiration with the known metabolic rates of living animals and used this data to infer the metabolic rates of extinct animals.

The team found that the dinosaurs’ metabolic rates were generally high. There are two major groups of dinosaurs, saurischians and ornithischians – lizard hips and bird hips. The bird-hipped dinosaurs, like Triceratops and stegosaurus, had low metabolic rates comparable to modern cold-blooded animals. Lizard-hipped dinosaurs including theropods and sauropods – two-legged, more bird-like predatory dinosaurs like Velociraptor and T. rex and giant long-necked herbivores like Brachiosaurus– were warm-blooded or even warm-blooded. Researchers were surprised to find that some of these dinosaurs weren’t just warm-blooded – they had metabolic rates comparable to modern birds, far higher than mammals. These results complement previous independent observations that hinted at such trends but could not provide direct evidence, due to the lack of a direct proxy for inferring metabolism.

These findings, the researchers say, can give us fundamentally new insights into dinosaur life.

“Dinosaurs with lower metabolic rates would have been, to some extent, dependent on outside temperatures,” says Wiemann. “Lizards and tortoises sit in the sun and bask, and we may need to consider similar ‘behavioral’ thermoregulation in ornithischians with exceptionally low metabolic rates. Cold-blooded dinosaurs may also have had to migrate to warmer climates during the cold season, and climate may have been a selective factor for where some of these dinosaurs might live.

By contrast, she says, warm-blooded dinosaurs would have been more active and needed to eat a lot. “Giant warm-blooded sauropods were herbivores, and it would take a lot of plant matter to fuel this metabolic system. They had very efficient digestive systems, and since they were so big, it was probably more of a problem for them to cool down than to warm up. Meanwhile, theropod dinosaurs – the group that contains birds – developed high metabolisms even before some of their members flew.

“Reconstructing the biology and physiology of extinct animals is one of the hardest things to do in paleontology. This new study adds a fundamental piece of the puzzle in understanding the evolution of physiology over time deep and comprehensive previous proxies used to study these questions, we can now infer body temperature through isotopes, growth strategies through osteohistology, and metabolic rates through chemical proxies,” says Fabbri.

In addition to giving us insight into what dinosaurs looked like, this study also helps us better understand the world around us today. Dinosaurs, with the exception of birds, died out in a mass extinction 65 million years ago when an asteroid hit Earth. “Having a high metabolic rate has generally been suggested as one of the main advantages when it comes to surviving mass extinctions and successfully radiating afterwards,” says Wiemann. Some scientists have proposed that birds survived while non-avian dinosaurs died due to the increased metabolic capacity of birds. But this study, Wiemann says, helps show that’s not true: Many dinosaurs with exceptional bird-like metabolic abilities became extinct.

“We are living through the sixth mass extinction,” says Wiemann, “so it is important for us to understand how modern, extinct animals have responded physiologically to past climate change and environmental disturbance, so that the past can inform conservation of the biodiversity in the present and inform our future actions.

Republished with kind permission from the Field Museum.