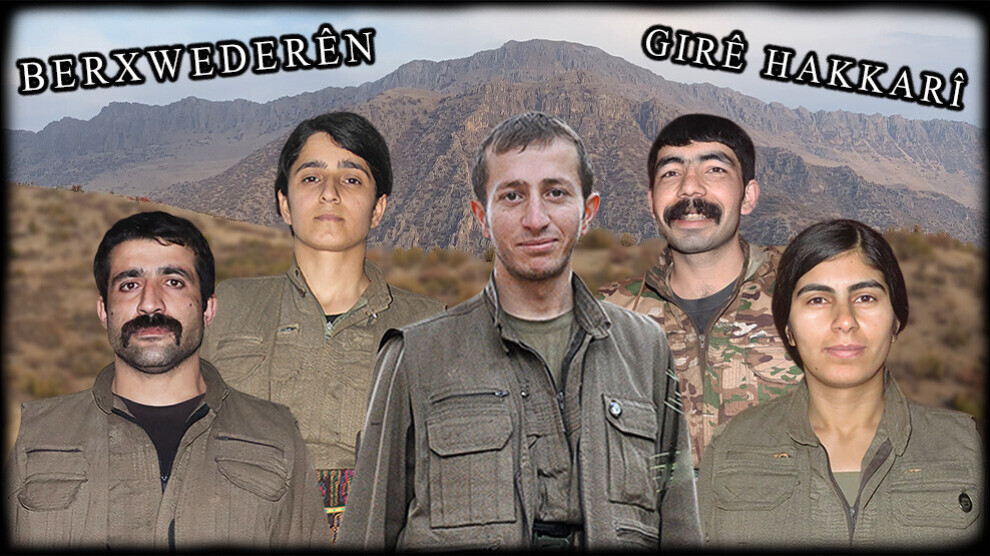 The People’s Defense Forces (HPG) press center released the names of five fallen guerrillas. As a result, Çekdar Oremar, Mardîn Penaber, Roza Hedar, Rojhat Dilbirîn and Serhed Agirî were killed in a poison gas attack by the Turkish army on July 4 in Girê Hekarî in the Metîna region in the Medya defense areas held by the guerrillas in southern Kurdistan (northern Iraq).

The identity information of the fallen guerrillas is as follows:

“Faced with the resistance of the guerrillas who are fighting today in the free mountains of Kurdistan for people to live as human beings, the Turkish state is failing to achieve the results it wants. For this reason, it attacks Kurdistan freedom guerrillas with bombs and internationally banned chemical weapons.In the resistance area of ​​Girê Hekari in Metîna, an epic resistance against the Turkish occupation was waged.From the combat tunnels and with mobile guerrilla units, massive blows were struck at the enemy with rich forms of action. The guerrillas seized weapons and military equipment from enemy soldiers and shot down a helicopter. Our companions Çekdar, Mardîn, Roza, Rojhat and Serhed were the architects of this resistance. They fought professionally with a lot of sacrifice and the conviction of victory and gave the enemy a historical lesson. The Turkish State, aiming at genocide, has once again committed a disgraceful war crime, and our comrades have fallen for the use of chemical weapons for days. Nevertheless, the Turkish state was not able to break the legendary apoist resistance,” the HPG said, and expressed condolences to the relatives of the martyrs and the Kurdish people.

Çekdar Oremar was born in Yüksekova district in Hakkari and belonged to the Oremarî tribe. Many of his relatives joined the Kurdish liberation movement and he knew the PKK as a child. He joined the guerrillas in 2014 in response to the Islamic State attack on Kobanê. He was already used to the hard work of his family and was aware that even in the mountains all achievements had to be worked on. His selfless commitment was complemented by ideological and military training. He focused on new guerrilla tactics and learned the professional use of various weapons. At the same time, he showed great dedication in the construction of tunnels. In the Zap, Cilo and Gare districts, he participated in the construction of the necessary infrastructures and in various guerrilla actions. In the process, he acquired significant military experience and finally went to Metîna in 2018, where he worked and fought in Girê Hekari until the end.

Mardîn Penaber was born in Maxmur and belonged to the Goyî tribe. The population of the Maxmur camp is made up of people displaced by the burning of villages in the Botan region of northern Kurdistan (eastern Turkey) in the 1990s and their descendants. Mardîn grew up with a corresponding consciousness. She was the niece of Zehra Penaber, who died during the resistance against the Islamic State in Kobanê. In 2016, she joined the guerrillas. Soon after, his siblings Mardîn and Zindan lost their lives in the resistance for self-determination in Cizre and Şirnak. His life as a guerrilla was therefore marked from the start by his attachment to the martyrs. Through her training in the mountains, she became aware of the strength of women and took hold of the ideology of women’s liberation. She then worked within the structures of the Komalên Ciwan youth organization and underwent specialized military training. She had been fighting in Metina since 2020.

Roza Hedar was born in Biryas village in Lice district of Amed (Diyarbakır). Her childhood was shaped by stories about her loved ones who died in the liberation struggle. She followed developments in all regions of Kurdistan with great interest and was particularly influenced by the struggle for Kobanê. In 2015, she joined the guerrillas. In the mountains, she learns more about the content of the PKK and discusses the ideology of women’s liberation presented by Abdullah Öcalan. The struggle for a grassroots democratic, gender-just and ecological society and the worldwide dissemination of this paradigm have become essential objectives for her. At the same time, she acquires military skills and becomes a competent militant of the YJA Star (Free Women’s Troops). She fought against the Islamic State for several years and then went to Metina as a unit commander.

Rojhat Dilbirîn was born in the Silvan district of Amed. His family and social environment was patriotic and he experienced firsthand the oppression of the Kurdish people by the Turkish state. Because he did not go to school for long, he had little exposure to the state’s assimilation policy. He sympathized with the guerrillas at an early age and decided to become a freedom fighter in 2015. The decisive factor in his participation in the guerrilla struggle was his desire for revenge against the massacres of the Turkish state and the ‘IS in Kurdistan. The interplay of natural life and camaraderie in the mountains impressed him, and he underwent basic training, where he quickly developed. He stays for a long time in the regions of Avaşîn and Zap and acquires there a military experience which he transmits to his entourage, thus ensuring a collective development. After additional military training, he went to Metina and participated in the construction of tunnels and defensive positions. Since 2021, he has fought with great courage against the invading Turkish forces.

Serhed Agiri came from Kobanê and witnessed the legendary resistance against the Islamic State in 2014. The brave fighters who inflicted the first defeat on the Islamic State became his role models. In 2019, he joined the guerrillas with great enthusiasm. He quickly got used to his new living conditions in the mountains and became involved in the content of the Kurdish liberation movement. After an ideological and military training, he went to Metina, where he worked tirelessly to install positions and prepare the necessary infrastructure. When the Turkish army attacked Girê Hekari on May 25, 2022, he was one of the first fighters to counterattack, despite his lack of war experience. He continued his resistance until the last moment of his life.

2022-09-17
Previous Post: Energoatom delivers most of the spare parts, chemicals and diesel fuel needed by ZNPP
Next Post: BGCAPP: Half of chemical agents destroyed | New