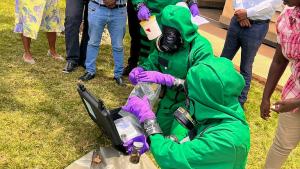 The Organization for the Prohibition of Chemical Weapons (OPCW) co-organized a training course for first responders from five of the eight Intergovernmental Authority on Development (IGAD) countries, in collaboration with the Republic of Sudan. The course was held in Khartoum, Sudan from 25-29 July 2022. The objective of the course was to build the chemical emergency management capacities of IGAD Member States.

OPCW experts provided first responders with the knowledge and skills to act in the event of a chemical attack or incident involving toxic chemicals, with an emphasis on the use of protective equipment and the fundamentals of chemical warfare agents. Participants were also briefed on carrying out sampling and analysis in contaminated areas, detecting chemicals and setting up an incident command and control system.

In his opening address, Mr. Khalid Mohamed, Head of International Organizations Department at the Ministry of Foreign Affairs of the Republic of Sudan, underscored Sudan’s commitment to implementing the Chemical Weapons Convention and commended the knowledge and skills acquired to strengthen national and regional preparedness to deal with incidents involving toxic chemicals.

Under Article X of the CWC, Member States “shall have the right to participate in the fullest possible exchange of equipment, material and scientific and technological information relating to the means of protection against chemical weapons “.

The Program for Strengthening Cooperation with Africa on the Chemical Weapons Convention – known as the Africa Program – focuses on the needs of OPCW member states on the continent, including promoting the uses of chemistry for peaceful purposes to support a safe and secure Africa.

As the implementing body of the Chemical Weapons Convention, the OPCW, with its 193 member states, oversees the global effort to eliminate chemical weapons forever. Since the Convention entered into force in 1997, it has been the most successful disarmament treaty, eliminating an entire class of weapons of mass destruction.

Over 99% of all declared chemical weapons stockpiles have been destroyed under OPCW verification. For its tremendous efforts in eliminating chemical weapons, the OPCW was awarded the 2013 Nobel Peace Prize.

The Intergovernmental Authority on Development (IGAD) in East Africa was established in 1996 and has eight member states: Djibouti, Eritrea, Ethiopia, Kenya, Somalia, South Sudan, Sudan and Uganda. Its mission is to assist and complement the efforts of its member states in the areas of peace, security, agriculture, environment, economic cooperation and social development.

/Public release. This material from the original organization/authors may be ad hoc in nature, edited for clarity, style and length. The views and opinions expressed are those of the author or authors. See in full here.
2022-08-08
Previous Post: Many drugs have mirror-image chemical structures – while one can be helpful, the other can be harmful | Kiowa County Press
Next Post: NATO allies train in chemical, biological, radiological and nuclear attacks