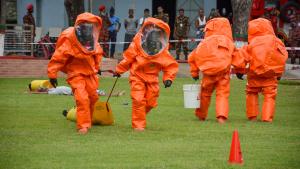 Chemical emergencies can arise from various situations such as a leak, fire or chemical attack. To help ensure that first responders have the skills to respond to a chemical emergency, the Organization for the Prohibition of Chemical Weapons (OPCW) co-hosted regional trainings in Seoul, Republic of Korea, from 13 to June 17, 2022, and in Dhaka, Bangladesh, from June 19 to 23.

The trainings were conducted in collaboration with the Republic of Korea CBRN Defense Command and the Bangladesh National Authority (BNACWC) respectively. Each week-long basic training included basic theoretical information as well as practical exercises.

In Seoul, Brigadier General Dae Wee, Commander of the CBRN Defense Command, stressed the importance of Article X of the Chemical Weapons Convention (assistance and protection against chemical weapons). He added, “It is in the interest of the Republic of Korea to contribute to the international capacity building programs of the OPCW by organizing such training courses and sharing our experience in chemical defence.

Addressing the course participants in Dhaka, Dr. Md. Enamur Rahman, Minister of State, Ministry of Disaster Management and Relief said, “I am confident that this company will make the fire and rescue service civil defence, as well as other related organizations, more effective in countering any chemical incident or accident. The engagement of the OPCW and BNACWC is important in ensuring chemical safety and security for the benefit of a peaceful world.

During the online closing ceremony in Dhaka, Ms. Odette Melono, Deputy Director General of the OPCW, underlined: “The value of training opportunities of this nature at regional and international levels cannot be underestimated. It expands the pool of experts in national protection programs, while building capacity and responsiveness at national, regional and international levels to minimize the potential impacts of chemical incidents”.

The training in Dhaka, Bangladesh brought together 37 trainees from six member states that are also members of the South Asian Association for Regional Cooperation (SAARC): Bangladesh, India, Maldives, Nepal, Pakistan and Sri Lanka.

As the implementing body of the Chemical Weapons Convention, the OPCW, with its 193 member states, oversees the global effort to eliminate chemical weapons forever. Since the Convention entered into force in 1997, it has been the most successful disarmament treaty, eliminating an entire class of weapons of mass destruction.

Over 99% of all declared chemical weapons stockpiles have been destroyed under OPCW verification. For its tremendous efforts in eliminating chemical weapons, the OPCW was awarded the 2013 Nobel Peace Prize.

/Public release. This material from the original organization/authors may be ad hoc in nature, edited for clarity, style and length. The views and opinions expressed are those of the author or authors. See in full here.
2022-07-15
Previous Post: A Brief Overview of the Superfund Chemical Excise Tax
Next Post: Ohio Teamsters sting global chemical giant INEOS