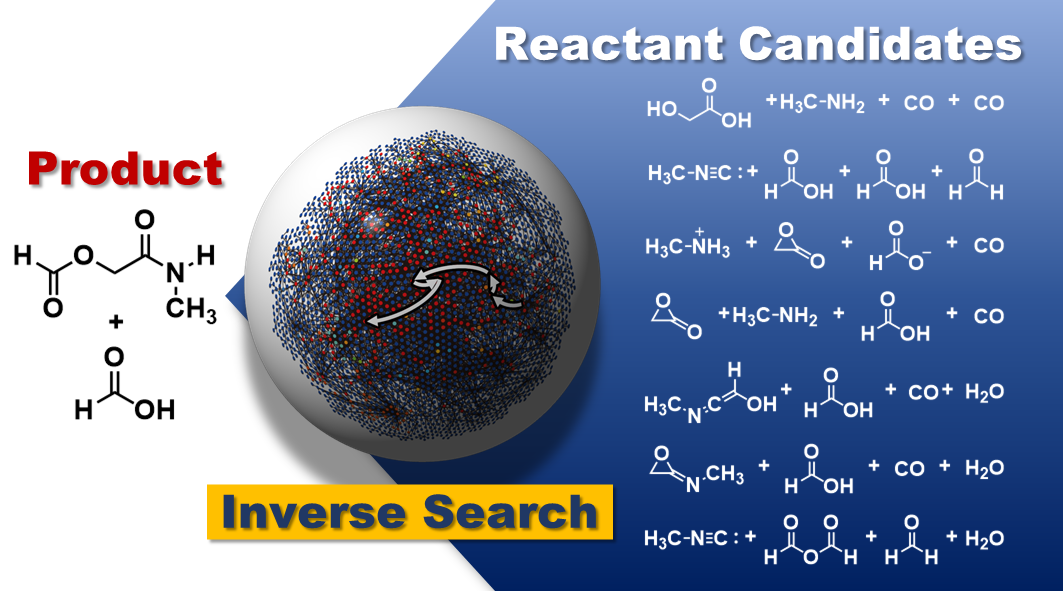 Have you ever caught the ending of a TV show and wondered how the story progressed to that ending? Similarly, chemists often have a desired molecule in mind and wonder what kind of reaction might produce it. Researchers from the Maeda group of the Institute for Chemical Reaction Design and Discovery (ICReDD) and Hokkaido University have developed a method capable of predicting “history” (i.e. the materials first and reaction pathways) of multi-step chemical reactions using only information about the “termination” (i.e. the product molecules).

Predicting the recipe for a target product molecule, with no knowledge other than the molecule itself, would be a powerful tool for accelerating the discovery of new reactions. The Maeda group previously developed a computational method that successfully predicted one-step reactions in this way. However, the extension to multistep reactions leads to a dramatic increase in the number of possible reaction pathways, the so-called combinatorial explosion. This large increase in complexity translates into prohibitive computational costs.

To overcome this limitation, the researchers developed an algorithm that reduces the number of paths to explore by eliminating the least viable paths at each step of the reaction. After calculating all possible paths for a step back in the reaction, a kinetic analysis method evaluates how well each path produces the target molecule. Reaction paths that do not produce the target molecule above a predefined threshold percentage are not considered significant enough and are not explored further.

This cycle of exploring, evaluating, and eliminating reaction paths is repeated for each backward step in a multi-step reaction and dampens the combinatorial explosion that would normally occur, making multi-step reactions easier to calculate. Previous methods were limited to single-step reactions, whereas this new method was able to predict reactions that involved more than 6 steps, marking a major leap in capability.

Generated structures and reaction path networks for the predicted reaction steps for the Strecker reaction (a) and the Passerini reaction (b). The white arrows show the multi-step path corresponding to the known reaction mechanism. (Image credit: Satoshi Maeda)

Although further work is needed to help predict even larger and more complex systems, the researchers anticipate that this breakthrough in managing multi-step processes will accelerate the discovery of new chemical reactions.

“This work provides a unique approach, as it is the first time that it is possible to make inverse predictions of multi-step reactions using quantum chemical calculations without using any knowledge or data about the reaction” , said Professor Satoshi Maeda. “We expect this technique to allow the discovery of completely unimaginable chemical transformations, in which case there is little knowledge or experimental data to use.”

This work was supported by the Japan Agency for Science and Technology (JST) through the Exploratory Research for Advanced Technologies (ERATO) grant JPMJER1903. Support has also been provided by the Institute for Chemical Reaction Design and Discovery (ICReDD), which was set up by the World Premier International Research Initiative (WPI) of the Department of Education, Culture, Sport, Science and Technology (MEXT) of Japan.

/Public release. This material from the original organization/authors may be ad hoc in nature, edited for clarity, style and length. The views and opinions expressed are those of the author or authors. See in full here.
2022-04-25
Previous Post: Acrylic Monomers Market Size, Scope and Forecast
Next Post: Officials express relief after chlorine leak and chemical plant fire