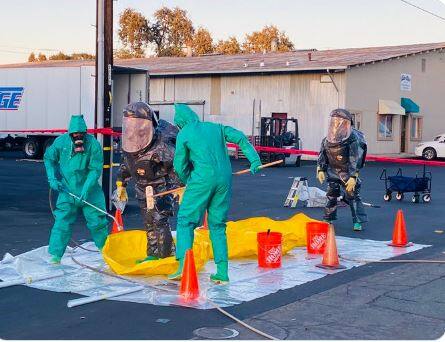 A Hazmat crew from the Santa Rosa Fire Department spent six hours Friday working to mitigate a chemical spill from a truck parked outside a company specializing in dishwashing and laundry systems.

The incident happened around 2:50 p.m. outside Auto-Chlor at 27 Maxwell Court when numerous pallets containing 1 gallon and 2 1/2 gallon chemical bottles shifted and fell to inside a tractor-trailer during transport, causing bottles to rupture, spill and emit a cloud of toxic gas, Battalion Commander Matthew Gloeckner said in a press release.

Upon arrival, firefighters found the rear doors of the truck open and fluid leaking out the rear.

The truck driver and an Auto-Chlor representative said the truck had arrived for delivery, and when they opened the back of the truck, there was a gas cloud and a hissing sound.

The department launched a full hazmat response and closed traffic for hours on Maxwell Court. Team members deployed a drone to fly inside the trailer to determine the problem. Then, wearing chemical protective suits with self-contained breathing apparatus, the team members entered. They found 15 bottles had toppled over and tipped over, Gloeckner said.

They packed the containers in secondary containment and used a neutralizing agent to absorb the chemicals spilled in the truck and on the ground.

After the spill abated, the truck was turned over to Auto-Chlor for cleanup, Gloeckner said.

The response included three engines, a ladder truck, a fire investigator, Gloeckner, and the Hazardous Materials Unit. Representatives from the California Bureau of Emergency Services assisted.