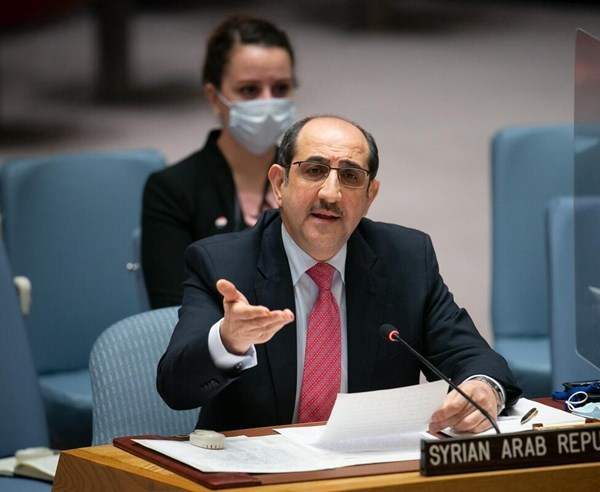 Syria. The politicization of the Syrian “chemical file” confirms the double standards

Syria’s permanent representative to the UN expresses his country’s rejection of all unfounded accusations by certain countries, first and foremost the United States.

Syria’s permanent representative to the United Nations, Bassam Sabbagh, said on Thursday that the continued politicization by the Organization for the Prohibition of Chemical Weapons (OPCW) and the Security Council Committee of the so-called “dossier chemicals” in Syria proves selectivity and double standards.

During a Security Council session on the “chemical dossier”, Sabbagh reiterated Syria’s position regarding the illegality of the establishment of the Investigation and Identification Team (IIT).

“The IIT was created illegitimately. We reject all the wrong and unprofessional working methods of this team, which naturally lead to false conclusions that only serve the agenda of some Western countries that use this team as a tool to serve their hostile agendas against Syria,” the Syrian diplomat stressed.

I reaffirmed today at #SC, #Syriaon the illegitimate creation of the so-called “Investigation and Identification Team (IIT). The unprofessional and faulty methods of its work will lead to false conclusions that serve the hostile agendas of some countries. pic.twitter.com/UMvT7y4MeM

Sabbagh expressed Syria’s welcome to the holding of the 25th round of the declaration’s assessment team consultations, noting that there are no restrictions on the team’s deployment. He indicated that the exclusion of someone from the team should not prevent the holding of this round, especially since the OPCW has many qualified experts who can undertake the same task.

He indicated that Syria had expressed its willingness to organize this tour in Damascus, The Hague or Beirut, underlining the desire of his country to organize a high-level meeting planned between the Syrian Minister of Foreign Affairs and the head of the Syrian National Authority with the Director General of the OPCW as soon as possible, in accordance with an agreed agenda that would help resolve outstanding issues.

Sabbagh mentioned that the Syrian National Authority has proposed to the Technical Secretariat to hold a high-level coordination meeting in Beirut to agree on its agenda.

The Syrian diplomat pointed out that Syria had facilitated a visit by the OPCW Technical Secretariat to undertake the ninth round of inspections at the Center for Scientific Studies and Research from September 11 to 19, expressing his delegation’s astonishment that the monthly report of the Director-General does not mention the eighth inspection cycle, which highlighted the absence of any activity prohibited by the Convention.

Sabbagh expressed Syria’s rejection of all baseless accusations by some countries, first and foremost the United States, of supporting terrorist groups that use chemical weapons in the country, noting that since its voluntary adherence to the Convention on chemical weapons, Damascus was keen to cooperate fully with the OPCW.

He pointed out that Syria submitted to the Director-General its monthly report on September 15, which included its activities related to the destruction of chemical weapons and its production facilities.

Regarding the work of the fact-finding mission, the permanent representative of Syria stressed that his country is still awaiting the publication of the mission’s belated reports on the accidents reported by Syria since 2017, calling on the mission to comply with the reference working document and the provisions of the Convention, in particular the ethics of verification.

Sabbagh also expressed astonishment that the OPCW Technical Secretariat and the Security Council’s 1540 Committee insist on ignoring submitted information on the possession and use of chemical weapons by terrorist groups in Syria or the manufacture of accidents just to accuse the Syrian army of having committed them.

“It’s a clear and blatant sign of selectivity and double standards. It reflects the politicization that controls this file,” he said.