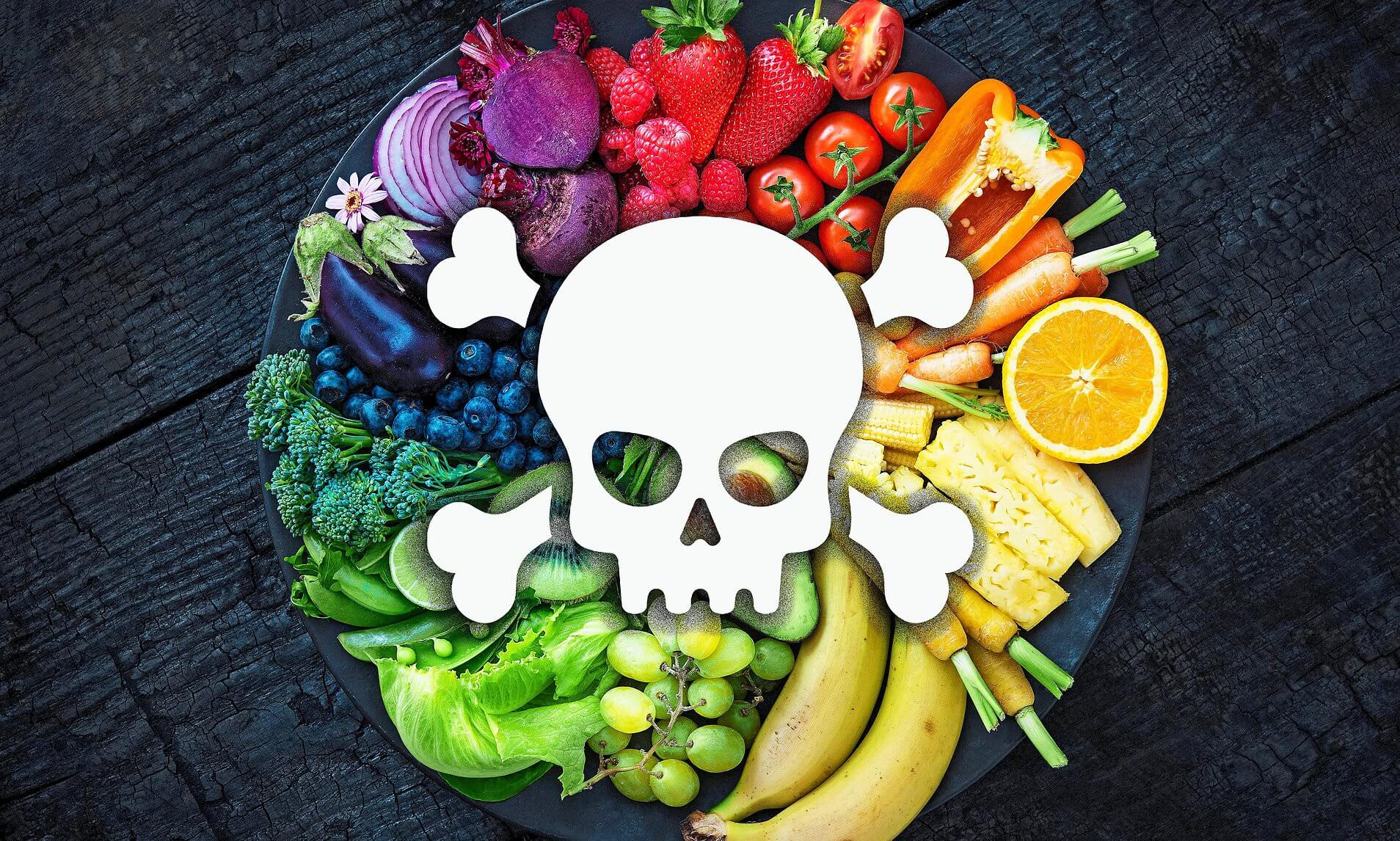 By: Wallace D. Wilton
In: Chemical work
OCould you give fruits and vegetables to your family after reading these titles?

Many European consumers might not, and they would be making a big mistake.

Fruits and vegetables are widely recognized as an essential part of a healthy diet. But according to a new report named The forbidden fruit per the Pesticide Action Network (PAN) Europe, if you eat these healthy staples, you are essentially poisoned. But how can regulators fail to act, and why doesn’t everyone just drop dead?

The new report steals its unscrupulous methods directly from the bio-industry-funded Environmental Working Group (EWG) in the United States, which annually publishes a list of ‘Dirty Dozen’ results of fruits and vegetables allegedly soaked in chemicals. . Whereas decried by scientists for its hysteria and its misrepresentation of the minute danger of minute traces of chemical residue, it has been a fundraising bargain for the activist group. Now the misleading model is being copied in Europe. This is a direct attack on the mainstream market – propaganda often cited by well-meaning but misinformed health and natural food sites and mainstream media reporters who should know better.

Are conventional fruits and vegetables soaked in chemicals?

Government regulators around the world carefully monitor pesticide residues on fruits and vegetables from multiple sources, including imports. These reports are published on government websites and provide transparent evidence of product safety. The aim is to build public confidence, to verify that agricultural chemicals are used responsibly.

For example, in the European Union, Brussels has started to track Member States’ progress in 2019 in reducing traces of chemicals in food. Last year, the EU found a recent 12% reduction in the presence of pesticides that contain toxic chemicals. On the other hand, PAN, using its non-articulated “proprietary” evaluation process (a non-transparency tactic that mimics the EWG in the US), claims to have found a recent increase in “harmful” residuals of 53%

So how do organizations like PAN take data that verifies safety and twist it into toxic poison?

The Pesticide Action Network Europe does not perform the sophisticated analytical chemistry required to measure pesticide residues. Instead, they rely on EU surveillance data provided by the Multiannual Control Program (MCP). The MCP carefully assesses the presence of discrete pesticides when their levels are above 0.01 mg/kg, which is ten parts per billion, or about ten seconds in 32 years. These ultra-sensitive test methods can detect chemicals present on this side or not.

The NAP’s ‘analysis’ focuses on EU substitution candidates, a framework of 77 agricultural chemicals that have been identified for substitution with ‘more favourable’ alternatives or non-chemical methods. It doesn’t necessarily mean less risky or more effective, it means replaced with a non-synthetic or natural poison that might do a similar job.

This EU data that demonstrates safety is misrepresented as dangerous in a simple way: PAN drops important information about how much is present. They ignore quantization. If a given chemical is detected at the slightest trace without possible risk, it is counted as if the fruit or vegetable was dripping with deleterious chemistry. It’s like someone taking a dropper of crude oil and placing a drop in the ocean in Iceland, then reporting that penguins will be covered in mud in Antarctica, after all there is oil in the world. ‘water. Oil drop = Exxon Valdez. Same.

In this language, if a chemical is detected, the product is considered “contaminated””a word frequently used in the report.

But in the real world, the dose makes the poison. When ignoring dose information, a handful of a few molecules is considered equal to a concentrated reactant. Whether it’s detected tens of thousands of times below biologically relevant levels, or it’s there at lethal concentrations (which nothing was even close to), it’s counted as positive.

With this approach, it’s easy to pass off something trivial as an atrocity.

Kiwis are a good illustration of this. They were tested for fidioxonil, a fungicide applied to kiwifruit, often after harvest. It helps limit the growth of fungus on fruit during shipping and retail, which means a better product for consumers and less food waste.

This chemical targets a specific aspect of fungal metabolism, poses a low risk to non-fungal organisms and washes out easily. Because it is applied post-harvest, it is not surprising that it was detected on 29% of kiwifruit. In all cases, the levels were well below the strict maximum residue limit (MRL), an amount defined as the concentration allowed on the product, a tolerance hundreds to thousands of times lower than biologically relevant levels.

They also use deceptive rhetoric to manufacture risks where none are known. For example, regarding the fungicide Fludoxonil, their report states: “Endocrine disrupting effects are suspected but complete data is lacking (sic).”

Which in scientific language means: There are no data to support the hypothesis that Fludoxonil is an endocrine disruptor. Same data, two completely opposite interpretations.

Determined to upsell their organic food sponsors, PAN and EWG are throwing warning flags about red meat at social media and unsuspecting journalists who report inflammatory misrepresentations about Science 101 and sober reality. 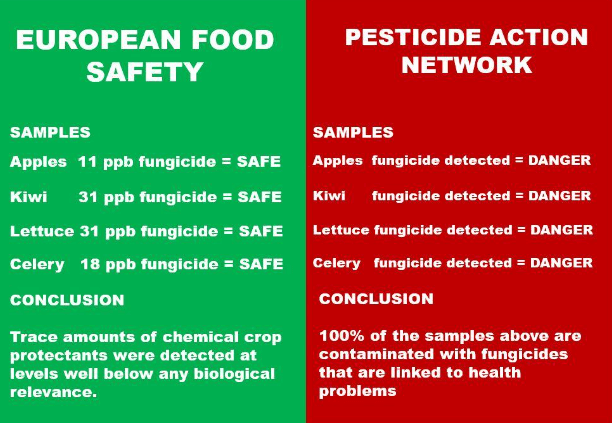 Unfortunately, the organizations, these militant NGOs posing as public interest groups, exploit the conduits of the mainstream media to spread their distortion. The complicated nuance of food safety, coupled with the potential for increased views or clicks, makes scary headlines too appealing to non-science journalists, who are duped into spreading misinformation.

This article in Daily News Hungary claims that pesticide levels are increasing, but the actual “level” of pesticides has never been reported. PAN Europe only reported the detection rate, not the measured levels, which are almost all below strict EU standards, counting on anti-farming groups to perpetuate misinformation.

This has harmful effects. Many of us stop eating relatively inexpensive fresh fruits and vegetables, and many opt for processed foods instead. Some may choose organic products, which cost much more, are not affordable to many, and use a host of pesticides not controlled by government agencies. Heck, they’re natural, how bad can they be? (see all natural alpha-amanitin, DIMBOA, cyanide)

Collateral damage to consumers, eroding trust in regulators, and fear of healthy fruits and vegetables are not deterring organizations like PAN and EWG from their deliberate misrepresentations. They make headlines, appear to care about consumers, and keep coming. In effect, these organizations seek to remove the tools of farmers’ choice, promote outdated agricultural production methods, and ultimately shatter trust in government regulators.

So how to interpret this report? Understand how data is distorted to generate incendiary headlines. Ignore misinformation. Let us instead celebrate the fact that we live in a time of unprecedented choice and abundance, with the most secure food supply in human history.

2022-06-07
Previous Post: Digestate could be a cheaper alternative to chemical fertilizers
Next Post: Jacobs builds robot to sample radioactive debris from Fukushima – News