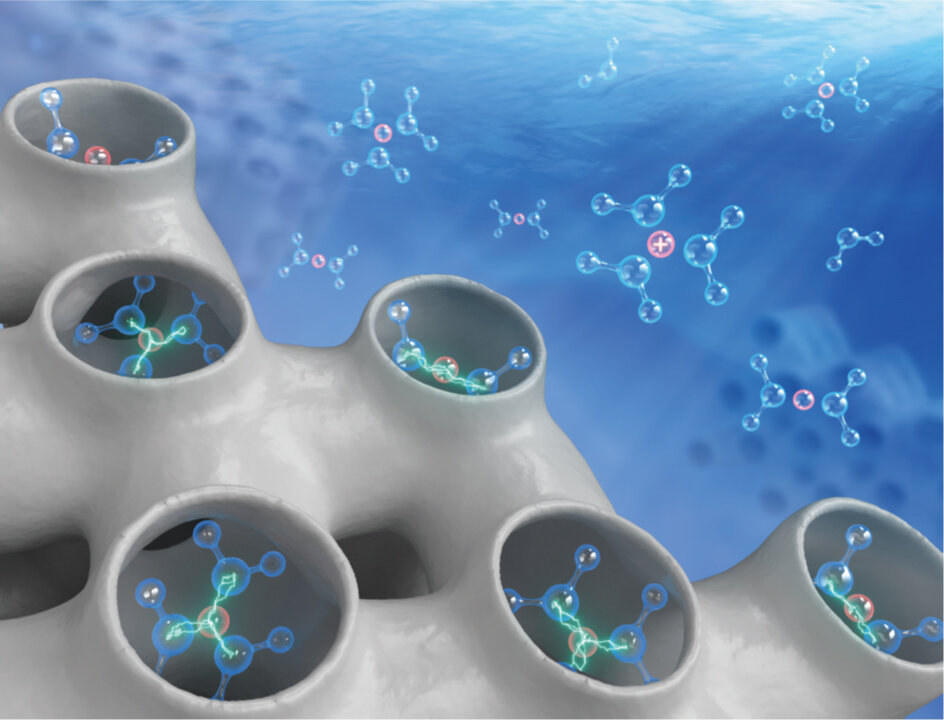 Solid-aqueous interfaces are ubiquitous and essential in a diverse range of natural and man-made systems and processes, from mineral formation, rock weathering and metal corrosion, to the complex functioning of biological membranes and ion channels. .

In all of these systems and processes, water and waterborne ions play a decisive role and underlie interfacial chemical reactivities, but often a fundamental understanding of these roles and effects is lacking. Water is considered a “green” medium that is abundantly available, harmless to the environment and inexpensive, so the advantage of carrying out chemical reactions in water over organic solvents – which have dominated the synthetic organic chemistry for good reason – seems obvious, even from a layman’s point of view.

One of the key questions, however, is “can we predict with good precision and accuracy whether water will enhance or suppress a chemical reaction on a solid catalyst?” Apparently, the answer lies in our ability to understand, in depth, the patterns of reactivity at the dynamic and complex interfaces between the catalytic solid and the aqueous environment, which will in turn lead to the formulation and discovery of new concepts. , principles and criteria. which can be exploited to maximize chemical reactivities towards the targeted product or product lines.

Despite the daunting challenges associated with this mission, the heterogeneous catalysis community has made great strides over the past decades, thanks to both the rapid development of enabling toolkits and the intensification of interdisciplinary knowledge transfer.

So where do we stand after decades of research on heterogeneously catalyzed reactions in the aqueous phase? Focusing on solid acid-base catalysts, which represent a subset of heterogeneous catalysts with broad applications in the chemical industry, a research team led by Professor Hui Shi from Yangzhou University, China, compiled a comprehensive assessment of the roles of water molecules, structural water-derived groups, and ionic species dissolved in them, for heterogeneous acid-base catalysis at the solid-aqueous interface.

Further limiting their attention to alcohol dehydration, aldol condensation, and sugar isomerization, all of which are prototypical acid-base catalyzed reactions, these authors described an assortment of effects engendered by water, using carefully chosen examples, and critically discussed their chemical origins and catalytic properties. consequences. The review was published in Chinese Journal of Catalysis.

These authors covered major advances in the understanding at the atomic and molecular level of several general modes of action, by which water affects reaction mechanisms and structure-performance relationships, building on new evidence gained for the individual set of acid-base catalysis at the solid-aqueous interface.

It is particularly important to recognize that the polar surface functionalities, silanols and cation-anion pairs for example, and the polarity and H-bonding characteristics of the different states along the reaction path have the most dramatic impact on the manifestation of the effects of water. By means of a comparative analysis, they concluded that for an analogous series of reactions, the roles of water can be anticipated as being generalizable from a specific subset of such chemistries. Finally, some emerging concepts that merited further exploration were highlighted, such as “interfacial ionic force” (or “trapore ionic force”, when the solid phase contains micropores – pores smaller than two nanometers or even less than 1 nm).

According to Professor Hui Shi, “Although many efforts to carry out reactions in water or aqueous solvents have been motivated by the inherent benignity of water as well as its availability and cost, the use of Water as a solvent or as a component of solvent mixtures should never be an uninformed choice without a solid understanding of the chemical origins of its promotional or adverse effects.”

Indeed, sometimes even a tiny drop of water is enough to boost the catalytic reaction dramatically, or “kill” the transformation completely. The assimilation of the ideas summarized in this review article will likely help researchers and practitioners to synthesize a coherent picture of water-related effects and better control the practical outcome in a desired and preferred direction.

Provided by Chinese Academy of Sciences

This document is subject to copyright. Except for fair use for purposes of private study or research, no part may be reproduced without written permission. The content is provided for information only.